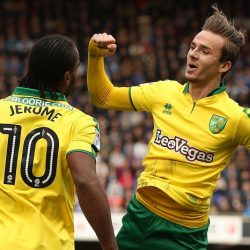 Norwich took all the glory in the East Anglian Derby against Ipswich this weekend which was live on Sky Sports. James Maddison scored the only goal of the game as his family watched on at Portman Road.

As expected, the game started with a fast pace, but Norwich managed to absorb and withstand the pressure from the hosts. Jonas Knudsen smashed the post with a powerful strike inside the first 15 minutes, but City. enjoyed periods of possession with the game generally played out in a topsy-turvy fashion. Although Ipswich always looked threatening from set pieces, Norwich held firm and the difference was Maddison’s touch of class to slot home neatly following some textbook patient build up from the Canaries.

Grant Hanley came on to replace the injured Zimmerman in the closing stages, but this did not impact the city’s strong defensive performance. This victory sees them extent their unbeaten run against Ipswich to nine games, and will have boosted their confidence ahead of their trip to North London tomorrow where they face Arsenal in the Carabao Cup.

Cambridge United earned all three points in a hard fought battle against Chesterfield at the Cambs Glass Stadium this weekend. As expected, Shaun Derry fielded an unchanged side after the U’s beat Yeovil on Tuesday the 17th. The U’s enjoyed the vast majority of possession in the first half and had plenty of chances to take the lead. However, against the run of play, Chesterfield took the lead just after the break.

This lead to a double substitution for the U’s and they were level minutes later with Medy Elito and Harrison Dunk having an immediate impact. Jevani Brown scored his first goal for the club when he lifted a perfect freekick over the wall and past the Chesterfield goalkeeper.  The winning goal came on 76 minutes when Uche Ikpeazu managed to find himself, as all good strikers do, in the right place at the right time and finish a shot from Jevani Brown that was saved moments earlier.

The win see’s the U’s take 7 points from a possible 9 in their last 3 fixtures. The games can come thick and fast in league 2, but these results have put them within touching distance of the playoff places.

Newmarket Town had an unfortunate end to their cup game. They found themselves 2-1 up with about 5 minutes to go following goals from Springs and Bowen. However, with strong winds prevailing throughout the game, it was increasingly difficult to judge the ball. The Jockey’s keeper Archer brought down the Enfield Borough centre forward in the closing stages of the game which gave away and penalty and reduced the Jockey’s to 10 men. The game went into extra time but Newmarket struggled to recover and lost 4-2. They can now concentrate on the league, where they face an unbeaten Stowmarket team on Saturday at the BloorIE stadium.