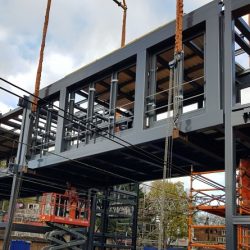 One of our divisions, UK Curtain Walling, have recently completed one of a series of bridge design, manufacture and installations for Network Rail.

This particular project is part of a nationwide contract that will see UKCW work with Network Rail designing, manufacturing and installing a large number of unitised bridges across multiple railway stations throughout the United Kingdom.

This is only the first of what is set to be a number of similar sized scale projects. We are very pleased to report that the installation went very well due to our careful planning from initial design sign-off to working alongside the Network Rail team to ensure rail closures and permits were in place.

Working on the Network Rail System can pose a significant number of problems for any contractor. The vast majority of the time contractors will be restricted to working on the weekend so as to not disturb the day to day running of the railway system across the UK, and this project was no exception.

However, UK Curtain Walling have worked very closely with Network Rail to design a unitised bridge system to allow for the shortest and simplest installation time possible. This unitised system actually allows for the majority of the bridge to be manufactured off site, which ultimately means that the components can be installed on site much quicker than the traditional method of building the entire bridge onsite. Once the unitised system was manufactured in house, it was then transported and craned into position on site, as seen in the photos.

This method of working helped to drastically reduce project completion time as well as minimising disruptions for network rail.

We look forward to updating you with the progress of more bridge installations in the not too distant future.