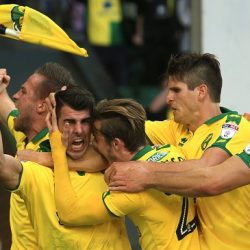 Oliveria rescued a dramatic late point for the canaries with the last kick of the game against Hull City.

It was a somewhat frustrating afternoon for the boys in yellow and green who enjoyed the vast majority of possession but struggled to really challenge the Hull City goalkeeper. Nouha Dicko scored for Hull with a cool finish to put them 1-0 up, although it has to be said that it was very much against the run of play. Norwich continued to press on with Hull’s strikers Nouha Dicko and Kamil Grosicki offering a constant threat on the counter attack.

On 57 minutes, Hull were reduced to 10 men when David Meyler received a second yellow card. This lead Daniel Farke to roll the dice and introduce some attacking changes, with Harrison Reed, James Husband and Tom Trybull being replaced by Wes Hoolahan, Marco Stiepermann and Nelson Oliveira.

These changes lead to City taking complete control of the game with Hull defending with all of their men behind the ball. City kept pushing and went agonisingly close through James Maddison, but their endeavours were rewarded in the depths of injury time when Nelson Oliveria pounced on a Cameron Jerome knockdown to send Carrow Road into a frenzy.

This late goal means Norwich hold on to their unbeaten run and will surely give them a huge lift when they prepare for the Derby against Ipswich next Sunday. Click Here to read the full official match report on the Canaries website.

Cambridge traveled to Lincoln City and secured a hard fought point from a tough test at Sincil Bank.

The U’s absorbed early pressure from the Red Imps. Uche Ikpeazu, Medy Elito and George Maris served as an attacking threat for Cambridge, with Liam O’Neill also forcing the Lincoln Goalkeeper Josh Vickers into a full stretch save. Medy Elito was also denied a penalty after Vickers appeared to clatter into him, but the referee waved for a corner instead.

Newmarket travelled to Ely for a local derby on Friday. The Jockeys opened the scoring through Steve Holder, before Ely equalised late on to steal the spoils.